"It seems very pretty," she said when she finished it, "but it's rather hard to understand."

This lipogram about Otto and his dog has no great English translation, so I’ve left it in German. Since the sound is the sense, one only has to listen to appreciate the story (it ends in pug puke):

Original Sin at the Water-Hole 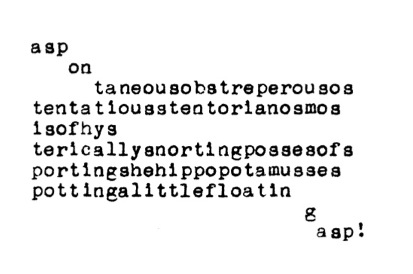 The slippery snake insinuates itself in the sinewy lines and, in ouroboral fashion, begins and ends the poem. If we uncoil Morgan’s concrete creation we get this: a spontaneous obstreperous osmosis of hysterically snorting posses of sporting she-hippopotamuses spotting a little floating asp!; or, The Fall of Safari Animals. Morgan’s careful layout clusters similar letters together so that the poem looks like one tangled mess of a word, the repeating sounds tripping over each other. If we pay particular attention to the broken-off bits that book-end the poem, we get this summarization of sin:

Christian Morgenstern’s “Fisches Nachtgesang” is a piscine paradox: a concrete poem rendered in abstract shapes, a sound poem with no discernable sounds, a foreign-language poem that needs no translation, a metrical poem consisting of nothing but metrics that many New Formalists will no doubt never identify as a metrical poem, or even a poem at all.

The title translates to “Fish’s Nightsong”. The poem consists of alternating lines of macrons and breves, the marks of scansion in Latin and Greek poetry, reimagined as both the shimmering scales of a sleeping fish and musical notations. How wonderful to turn something consigned to the paper oceans of Classics scholars into a watermark of whimsy. The scansion marks split the poem into one of sound and one of shape.

A song at night might be a lullaby. If the macrons go thump in the night, and the breves consign a consonantal thm to their repertoire, then we get this percussive berceuse: thump-thm-thm-thump-thump-thm-thm-thm-thm-thump-thump-thump-thm-thm-thm-thm and so on. Crescendo, diminuendo, terraced dynamics. It is the fish’s heart beating, an ambient underwater soundscape, a song hummed through puckered lips, and ultimately, with no words to anchor the symbols, no sound at all. The scansion symbols are variable; one can assign any sound or instrument to them and all that remains constant is the pattern of stress they impart. Morgenstern indicates no actual sound, and the stress marks wait for a reader to come along and give them meaning. It is similar to looking at a real fish below real water and not being able to hear the swish and bubble of its aquatic world from one’s stance on shore. The sound exists beyond the water and must be imagined.

Likewise, the shape of the fish remains just out of view. The macrons and breves cluster in a vaguely fish-shaped form. They show a fish in abstract with all its details lost in the murk. The breves look like fish scales of a child’s drawing and the macrons might be crude renderings of horizontal fins, but lines are not connected to form a solid figure. Again, the reader must fill in the blanks himself.

Morgenstern wrote “Fisches Nachtgesang” in 1905 at the beginning of a century that would upheave the definitions of literature and art. Some critics may dismiss his poem as a textual trick, nice enough, but not poetry. But consider the use of the macrons and breves. These symbols, particular to the study of prosody, root the poem in the tradition of Latin and Greek poetry from which all other literature in the Western canon blooms; and Morgenstern, confronting the enormity of the canon behind him, baits the future with a little fish dreaming its silent song, the tune yet to be invented.

To meet a bad lad on the African waste
Is a thing that a lion enjoys;
But he rightly and strongly objects to the taste
Of good and uneatable boys.

When he bites off a piece of a boy of that sort
He spits it right out of his mouth,
And retires with a loud and dissatisfied snort
To the east, or the west, or the south.

So lads of good habits, on coming across
A lion, need feel no alarm
For they know they are sure to escape with the loss
Of a leg, or a head, or an arm.

The moral of the poem is that the virtuous end up only slightly better off than their vile counterparts. Compare to Belloc’s “Jim“.

About the Shark, phlegmatical one,
Pale sot of the Maldive sea,
The sleek little pilot-fish, azure and slim,
How alert in attendance be.
From his saw-pit of mouth, from his charnel of maw,
They have nothing of harm to dread,
But liquidly glide on his ghastly flank
Or before his Gorgonian head;
Or lurk in the port of serrated teeth
In white triple tiers of glittering gates,
And there find a haven when peril’s abroad,
An asylum in jaws of the Fates!
They are friends; and friendly they guide him to prey,
Yet never partake of the treat–
Eyes and brains to the dotard lethargic and dull,
Pale ravener of horrible meat.

The awful, oafish Maldive shark is not the poem’s centerpiece, nor its most frightful creature. I am more wary of the silent pilot-fish that do the shark’s bidding and, being so close to the creature, fail to see its evil.

Melville uses dense, polysyllabic adjectives to describe the shark — “phlegmatical”, “Gorgonian”, “lethargic” — that slow the lines and cast a sense of dread. “Phlegmatical” sounds and looks horrible. In contrast, the pilot-fish are qualified by short adjectives like “sleek”, “slim”, “azure”, and “little” that sound rather pleasing and beautiful.

Not quite Moby Dick in miniature, but “the Maldive Shark” samples the novel’s multivalent linguistic structures, style, and darkness.

Hid by the august foliage and fruit
of the grape-vine
twine
your anatomy
round the pruned and polished stem,
Chameleon.
Fire laid upon
an emerald as long as
the Dark King’s massy
one,
could not snap the spectrum up for food
as you have done.

The poem’s twist is the use of “twine” as a verb and not, as one first expects, a noun (as in “grape-vine twine”). One must look twice to uncover the sinuous syntax.

Unscrambling the Waves at Goonhilly 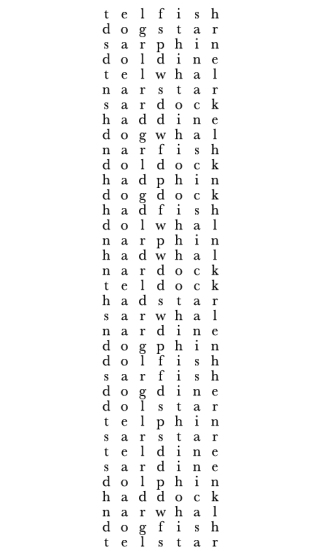 Goonhilly Downs, situated between the Atlantic Ocean and the English Channel, contains the Satellite Earth Station, a cluster of satellite dishes that was once the largest ground station in the world.  “Unscrambling the Waves at Goonhilly” starts as a garbled satellite transmission trying to relay the names of various sea creatures. Like the computer in “the Computer’s First Christmas Card”, the satellite, or the scientists manning the satellite, must make several attempts to sort out a simple message. The transmission ends up being a list of rather mundane marine life ending in telstar, which sounds like an aquatic animal but is actually a type of satellite. This semi-surprise ending emphasizes the tension between the phonetic and spatial aspects of the poem; when we hear star we think it will match with fish, but we see that the two could not be paired with each other. Part of the fun is watching the odd combos that result in the syllables bouncing off each other before finding their proper partner — dogphin (dog’s fin?), hadfish (lost at sea?), sardock (cynical sardine?)

I think that I shall never fear
a brontosaurus that is queer,

iguanodon as fetisheer,
a mammoth bringing up the rear,
an astrodon with extra gear,

metrosexual squirrel and deer,
a breeder with a dance career,
a fruit with cauliflower ear,

a lesbianic Chanticleer,
a grinning limpish-wristed Lear,
the weird one or the mutineer,

I’ve done a bad, bad thing and taken out the epigraph, if only because I found it wordy and too topical for a poem that shows taboo indulgence has been around since triassic time. Suitable for triceratops and bottoms.

Below the thunders of the upper deep;
Far far beneath in the abysmal sea,
His ancient, dreamless, uninvaded sleep
The Kraken sleepeth: faintest sunlights flee
About his shadowy sides; above him swell
Huge sponges of millennial growth and height;
And far away into the sickly light,
From many a wondrous grot and secret cell
Unnumber’d and enormous polypi
Winnow with giant arms the slumbering green.
There hath he lain for ages, and will lie
Battening upon huge seaworms in his sleep,
Until the latter fire shall heat the deep;
Then once by man and angels to be seen,
In roaring he shall rise and on the surface die.

With language as dense as the creature’s sea green sleep, “The Kraken” avoids mention of the physical attributes of its titular subject. Tennyson forces the imagination to fill in the horror as the reader waits for the answer to reveal itself on shore.

Siesta of a Hungarian Snake

Not just a dance of fricatives, but a concrete poem as well: the capital letters represent the snake’s bulging stomach after a midday snack.

You are currently browsing entries tagged with animals at Ondioline.